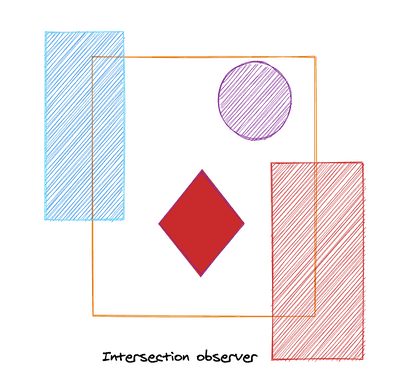 The formal definition is available on MDN Intersection Observer. But to the people who are cool with an informal explanation to intersection observer can stay with me for this section. So, Let’s start !!

Before I starts with some code. Let’s see what intersection observer does.

It basically tells you how much of the proportion of a DOM element(or target element) is visible in the area covered by a root element.

So whwnever you need to decide whether an element is visible in the parent’s area, you should think of intersection observer.

One of the best part is that you do not need to take care of screen resizes, It takes care of that automatically.

Let see some visuals to understand it more :

Notice both, image and the code snippet.

Intersection Observer is a constructor function. which you can call with options and callback.

Let’s say now we want to observe the DOM element with id #listItem. We can do that by following statements.

To start unobserving the same element, we can write following statement:

callback gets called with complete entry object and observer , which gives information about the observer, target element and root element. You can read more about it here. Entry object You can place your logic in response to the intersection change inside this callback. This callback is the place where you will sepending most of your time.

Note: This section below article assumes an intermediate understanding of React.useRef, React.useCallback, React.useReducer and React.useEffect. If you haven’t read them. Please give it a read at Reactjs hooks

Before I start getting into implementation, I think it’s better to look at the hook API first. Then we will work backwards.

The hook returns an array. Let’s say that array name is Arr.

Notice above that we are not passing the refs from the App component, but we are getting refs back from the the useIntersectionObserver. This is good because the consumer of this hook doesnot have to create an ref and send it to the hook. Less work for consumer. I have explained this kind of pattern in this article.

Now we need to construct the observer object using IntersectionObserver constructor. We also need to put it inside useEffect because we want to watch for options changes. Following code is the crux of this hook.

So whenever the visibility callback (options.visibilityCondition) return true, isVisible will be set to true. and accordingly the App component will get to know it.

We will see more parts ot this hooks and different pattern’s decisions I took while writing this hook.

This article just touches important aspect of creating an intersection hook. But there is also other pieces of code which makes this hook consumable. But yes, I think the explanation for all that is going to take one more article.

But I will not leave you guys stranded here. I have packaged the useIntersectionObserver in a npm package. You people can try it and also see the github code if curious.

Most of the patterns, I follow while writing react hooks, I have explained in this article.